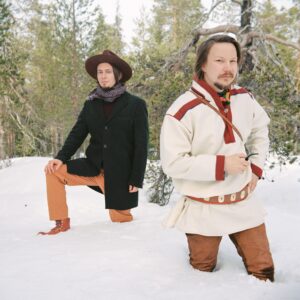 In this collaboration between writer-musician Niillas Holmberg and saxophonist-composer Pauli Lyytinen, the listener becomes immersed in shoreline landscapes where the water’s edge rises and falls. Holmberg reads some of his poetry, combining it with Sámi joik fragmented by the changing shoreline. Lyytinen, meanwhile, builds entire musical worlds upon this, using the saxophone, percussion instruments and electronics.

Free entry. There are 40 seats available, which will be filled on a first-come, first-served basis. We do not accept advance bookings but to reserve a seat, you may pick up a ticket at Kirpilä on the Sunday from 12 pm onwards.

We look forward to seeing you! 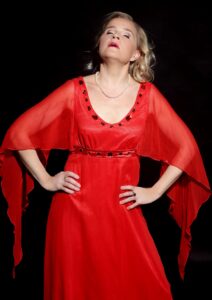 Free entry. There are 40 seats available, which will be filled on a first-come, first-served basis. We do not accept advance bookings but to reserve a seat, you may pick up a ticket at Kirpilä on the Sunday from 12 pm onwards.
We look forward to seeing you!
Photo of Piia Komsi by Ville Paul Paasimaa
Piia Komsi, coloratura soprano:

“It seems nothing is beyond the capabilities of soprano and cellist Piia Komsi…— The opera Medusa is a virtuosic show of Komsi’s skill.” (Vesa Siren, Helsingin Sanomat, 19 August 2022)

“Komsi’s voice is phenomenal, capable of extremes of pitch and textures beyond the range of most, combined with extraordinarily crisp articulation. Her voice is almost superhumanly elastic, her diction precise even in phrases as convoluted as those thrown at her by Joyce and Eötvös.” – Anne Ozorio, Opera Today

“Most of all, though, the whole 40-minute work sets a fearsome test for any coloratura soprano, and Komsi passed it superbly, meeting every challenge with real operatic brilliance.” – Andrew Clements, The Guardian

Coloratura soprano Piia Komsi started studying music at the age of seven, as a cello student of Jouko Paavola and Lauri Pulakka at the Central Ostrobothnia Conservatory. As a teen she was accepted to study under Professor Arto Noras at the Sibelius Academy, where she completed a cello diploma. She supplemented her cello studies with Frans Helmerson in Sweden and Aldo Parisot at Yale University in the US, where she also studied singing under the tutelage of Lili Chookasian. Komsi’s debut cello concert took place in 1990. She went on to graduate in 2002 from the Sibelius Academy’s opera degree, where her teacher had been Marjut Hannula, and held another successful debut concert, now as a singer, in 2003. Komsi was attached to the Finnish National Opera’s orchestra as a cellist between 1989 and 2001.

As a coloratura soprano, Komsi’s breakthrough role was that of the Maid in Thomas Adès’s opera Powder Her Face, at the Musica Nova festival in Helsinki. Since then she has been acclaimed in many roles, most recently those of Medusa and lover boy Narcissus (Paola Livorsi: Medusa), Martha (Le Malentendu), Medea (Pascal Dusapin: Medea Material), Venus/Gepopo (György Ligeti: Le Grand Macabre), Queen of the Night and Pamina (Mozart: The Magic Flute), Brünnhilde (Wagner/Dove: Ring) and Daughter Kraut (Heinz-Juhani Hofmann: Ahti Karjalainen – Life, Kekkonen and Works). Piia Komsi has fulfilled roles at the Finnish National Opera and in independent Finnish opera productions, as well as internationally, in houses including the Teatro Comunale di Bologna, Opernhaus Chemnitz, the Bavarian State Opera, Théâtre du Capitole in Toulouse, Teatro di San Carlo in Naples, Théâtre et Musique in Paris, Teatro Olimpico in Rome, Teatro Colón in Buenos Aires, the Opéra de Lille and the Israeli Opera in Tel Aviv.

Komsi is a sought-after interpreter of Baroque and new music around the world. Several works, ranging from operas to chamber music, have been composed specifically for her virtuosically supple voice, which she bends into the most astonishing vocal acrobatics. One of her most intense partnerships throughout her singing career has been with the composer Unsuk Chin, some of whose works Komsi has premiered and recorded. Komsi sang the role of the Cat at the premiere of the opera Alice in Wonderland in Munich (a performance which was voted as the best opera premiere of the year in Germany), and together with her sister Anu Komsi, Piia appeared at the premiere of Cantatrix Sopranica in London, having performed it since then with numerous orchestras around Europe.

Throughout her singing career, Piia Komsi has also been diligent as a lied performer, actively collaborating with pianists Ilmo Ranta and Juho Alakärppä, among others. Piia’s full programme and other details can be found at www.piiakomsi.com.

Piia Komsi’s latest conquest has been singing and playing the cello simultaneously as the only coloratura soprano-cum-cellist in the world, and works have been composed for her in this capacity by Liza Lim, Anna-Lena Laurin, Heinz-Juhani Hofmann, Jovanka Trbojević and Paola Livorsi. In Finland, Piia has appeared as a guest performer at the Finnish National Opera, West Coast Kokkola Opera, Pori Opera, Opera Cava in Nilsiä, and productions by Taite and Skaala.

Piia Komsi’s recording of “Mother Tongue” on the album Singing in Tongues by Liza Lim was selected as one of the best recordings of 2021 by The New Yorker. In 2018, Komsi received the prestigious Franco Abbiati Prize for the best contemporary opera performance in Italy for Dusapin’s opera Medea, where she sang the eponymous lead role.

In 2019, Komsi was one of the candidates for the prize Sängerin des Jahres, on the highly acclaimed shortlist compiled by Opus Klassik, among names such as Renée Fleming, Anna Netrebko and Diana Damrau, in two categories: Category 1, Female Singer of the Year (“Piia Komsi received the nomination in this category for her performance of Rolf Riehm’s Die schrecklich-gewaltigen Kinder / O Daddy in a live recording.”) and Category 9, Vocal Soloist Recording (Concert Piia Komsi–Rolf Riehm: Die schrecklich-gewaltigen Kinder).

Other accolades received by Komsi’s recordings include the Emma Award.

Komsi’s latest album, Soita. Kirjoita joskus. Ruf an. Schreib doch mal, contains works composed for her soprano-cello combination and solo soprano voice by Heinz-Juhani Hofmann, and has already received praise from several critics. It landed her once again on the lists for Female Singer of the Year and Contemporary Music Recording of the Year 2022 by Opus Klassik.

The album Solaris, released on 22 November 2012 under the label Naxos/Proprius, contains prayers and songs of comfort (including new works by Rautavaara, Tuomela, Hofmann, Puurtinen, Järvelä, Yanov-Yanovsky, Raskatov, Bach, Schubert, Boulanger). It was praised as “the best album of the year” and “a genuine art recording” by some critics.

– From the Grammar of Dreams (Kaija Saariaho/Ondine, Record of the Year in Finland)

In 2022–2023, Piia Komsi’s appearances will include, among others, lead roles in the following premières:

– Paola Livorsi: Medusa opera and dance performance, a production by Exit3 Company with Komsi as artistic director and producer

Pianist Juho Alakärppä has won awards in Finland and abroad, particularly for his work on lied music and in chamber ensembles. He regularly performs with world-famous vocalists and instrumentalists, both in his homeland and around the world. Alakärppä is also a beloved teacher of chamber music and accompaniment at Centria University of Applied Sciences. One of the founder members of the Finnish Lied Academy, Alakärppä has also collaborated with Aarne Pelkonen as artistic director of The Light of the Lied festival. 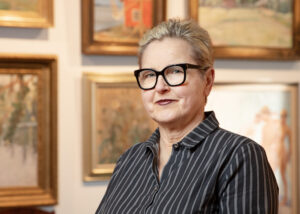 Guide of the Kirpilä Art Collection, MA Eija Olsson tells in Swedish about Juhani Kirpilä and his art collection.

We look forward to seeing you on the Swedish Day!

Ensemble Gamut! has created a unique sound by combining elements of medieval music, Finnish folk tunes, improvisation and electronic soundscapes. The band name references Guido d’Arezzo’s medieval music theory system, the gamut, while also meaning “the whole series of recognised musical notes”. Kamut in Finnish refers to folk music, as well as friendship. The ensemble released its first album, UT, in December 2020. It landed on YLE’s list of the best art music records and received an award from the Finnish Early Music Association. Their second album, RE, will be released by Eclipse Music on 25 November 2022.

In its Lapsed caick laolacatt! programme, Ensemble Gamut! examines the earliest surviving music from Finland, including written music from the time of Saint Henry, Bishop of Finland, from the Cantus Sororum of the Bridgettine Sisters of Naantali and from the Piae Cantiones collected by the Cathedral School of Turku, as well as historical oral poetry. Put together, these early sources, the ensemble’s improvisation and electronic soundscapes form a historically inspired yet modern entity.

Free entry. There are 40 seats available, which will be filled on a first-come, first-served basis. We do not accept advance bookings but to reserve a seat, you may pick up a ticket at Kirpilä on the Sunday from 12 pm onwards.
We look forward to seeing you! 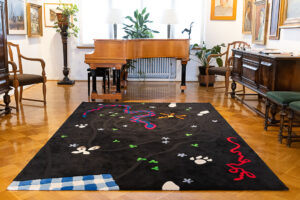 Free entry. There are 40 seats available, which will be filled on a first-come, first-served basis. We do not accept advance bookings but to reserve a seat, you may pick up a ticket at Kirpilä on the Sunday from 12 pm onwards.

We look forward to seeing you!

Photo of the Salon by Riitta Supperi